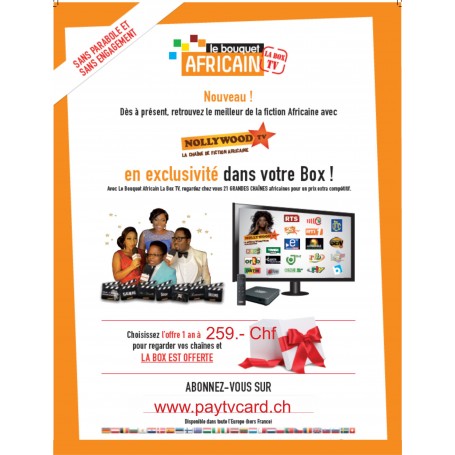 More available at the moment

Internet connection in reception of 2 Mbps and traffic without limit is required !

This product is no longer in stock

Notify me when available

TV channels of the African Bouquet

Internet connection in reception of 2 Mbps and traffic without limit is required!

Democratic Republic of the Congo

The chain of the continent

Africable TV is a General Pan-African channel, the first of its kind in Africa.

Dakar to Djibouti, Bamako and Johannesburg. Casablanca in Brazzaville by stopover in Kigali. Africable is the string of the Continent.

Africable knows how to put at the disposal of all Africans, news from the continent.

Africa is the last born of the TRACE group.

The new music channel is dedicated to the music and African cultures with the greatest hits of African music from the classics to the newest form of clips (90%), concerts and documentaries.
The channel offers the best musical programming of the African sounds from throughout Africa (francophone, anglophone and lusophone): Cup shifted, Afro pop, makossa, no dombolo, kizomba, kwaito house...

Your partner for large events

Among other things, it broadcasts two JT in french daily, a news, debates, the minutes of the Council of Ministers, documentaries, as well as magazines like Wanrou which aims to promote the cultural riches and the ongoing development initiative in the benign North but also space Francophone or space UEMOA.

Always at the heart of major events

The RTB offers many magazines: Culture, health, Sport, economy, youth Magazine, Information with JT in french and in the national language with flashes news in Lobiri, Bwamu, Gulmancema, and in Bissa.

As a general African tv, its mission is to ensure the television public service in all the extent of the territory, to support and participate in the programmes of economic and social development, and to contribute to the promotion and dissemination of culture Burkina Faso through the world.

The Cameroonian CRTV-TV television, has been broadcasting since December 23, 1985. It is the only channel of public television of the country and she was only allowed to Cameroon television channel.

Beyond the image, we report

STV 2 offers many rounds of news and cultural and musical magazines.

The chain that brings together

Gabon TV is the first channel of the Gabonese television broadcasting.

RTG TV brings you and who looks like you

RTNC - Democratic Republic of the Congo

Closer and further away at the same time. And serving you is our duty.

ORTM offers many magazines on the Malian culture, music, magazines of societies, the Malian serials and also sport and entertainment. It broadcasts several news flashes and weather during the day with national and international news.
ORTM broadcasts about 80% of its information in french, the remaining 20% are in local languages.

The mid-day news is broadcast daily at 1 p.m. in french and national languages. It offers many magazines on health, the environment, Religion. The RTS broadcasts local movies.

The first tv of senegal

Television future media (TFM) with its slogan "the mirror of Senegal" is a completely private general-interest channel. Financed from own funds by the singer and Senegalese businessman, Youssou Ndour, she is the last born (May 11, 2010) of the Group future media, which had, before his advent, the tabloid the observer, first daily in the country, and the RFM, first radio in Dakar regions.

TFM is free and don't claim any Chapel, if not that of ethics and equity. Made for the Senegalese, it opens to Africa and the rest of the world.

Subsidiary of South Media, equipped with cutting-edge technology, CFL is a television approach based on the all-digital, from production to dissemination; its structure is the first digital platform of dissemination and exploitation DTT (Digital Terrestrial Television) in sub-Saharan Africa.
The string of the future aims to show the picture but above all the spirit of Togo to Africa and the world.

The TV provider remains solely responsible for the content of its packages and the availability of channels included in its offer.

30 other products in the same category